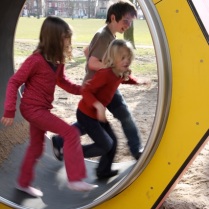 In our document “Towards a Development Plan” (2008) we noted that the lack of an area where children could play.  A playground had been built next to Denmark Road in the 1950’s but removed following persistent vandalism.  We observed that a new play-space designed to incorporate the features of the Park rather than be separated behind a fence would be our preference, but that children should be involved in the design through consultation and workshops.  In the difficult financial climate we thought this to be a long term project, but the city benefited from the Government’s Playbuilder Project and in 2010 we were asked to help in its design.  The Council’s Children Department organised a series of events at which schoolchildren were able to state their preferences from illustrations and examples of available installations and their choices informed the selection for the Park.  Our preference for a site within the trees near to the mounded part of the Park was accepted and in the middle of the difficult winter of 2010 with snow all around, the equipment was set out and the idea was brought to fruition. It has been a great success and is one of the attractions of the Park.

I am a 76 year old retired architect with an abiding interest in Whitworth Park, in Manchester. This started when I was involved professionally in work on the local area in 1964 but became more intense through my work in retirement on the committee of the Friends of the Whitworth - Whitworth Art Gallery being part of the original concept for the Park but until 2009 from it by a fence. The poor condition of the Park in 2004 prompted the birth of Friends of Whitworth Park in 2006, of which I am currently Chair.
View all posts by kenshone →
This entry was posted in Uncategorized. Bookmark the permalink.